Close
HomeOur blogJersey HistoryFar from the paddling crowd. A walk to Icho Tower

Far from the paddling crowd. A walk to Icho Tower

There are few if any places in our small island where you can truly get away from it all. To wander freely without encountering another person, to enjoy a natural environment teeming with wildlife, to really slip the bonds of our modern world. An impossible dream? Well no, actually. Lying off the southeast coast is a beguiling wilderness just waiting to be explored. The challenge: once a day at least it’s covered in water. The opportunity: when accessible, you can visit in the company of an expert guide from Jersey Walk Adventures, which is exactly what Our Island decided to do. 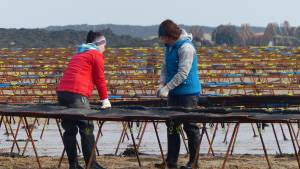 Working at the Oyster farm

‘When you think that back there,’ pronounced our guide Derek pointing towards the distant St Clement coastline, ‘are 100,000 people. While out here, in this whole vast area, there are perhaps just 20 including our group. Want to get away from it all? Welcome to Jersey’s wilderness.’

We had truly entered another world – one into which most people have never ventured. This is a place where nature calls the shots, thankfully with Ramsar protection this ensures it stays that way. Yet this is also a place in which islanders have left their mark, cultivating, harvesting and fortifying, and continue to do so as we discovered on this walk adventure.

At the appointed hour, our group had gathered at La Hocq Slip, furtively glancing at the other walkers (wellington boots and bobble hats gave them away) and gazing out to sea where the retreating tide was uncovering a jumbled landscape of rocks, sand and seaweed. Far off through the misty haze, a distinctly angular object was visible among the irregular contours. Icho Tower stands about a mile from the shore, perched on a rocky outcrop untouched by even the highest tide. It was our landmark destination that afternoon, an enigmatic location that none of the group – including locals – had ever visited before.

Derek Hairon has been leading groups to Icho Tower for 10 years, part of the Jersey Walk Adventures’ programme that includes visits to Seymour Tower, night-time moonwalks to discover bioluminescence on the beach, oyster trails and foraging for edible seaweeds. Raised nearby in a house overlooking the rocky foreshore, the stretch of coast was his playground as a child and now his place of work. And it’s somewhere, he explained, that anyone can visit and enjoy providing they stick to some basic rules and use a little common sense.

‘Having some of the biggest tidal ranges in the world means that along the southeast coast, huge areas of land uncover twice a day. Standing here thousands of years ago, we would have been looking out over a wide flat plain, stretching away to the modern French mainland. As the tide recedes, the remnant of that ancient landscape becomes visible for a brief period before disappearing again. A spot here that is dry at low tide can have up to 11 metres of water covering it at high tide. This dramatic contrast is what helps create the dynamic environment we will be exploring on today’s walk.’

It was a blessing that the weather on this walk was clear with just a watery blue sky and a light breeze – such a contrast to the grim conditions of preceding weekends. Do you go out whatever the weather I asked? Of course, was Derek’s breezy response, if you want to get close to nature, you have to take the good with the bad. Fortunately, on this day it was good, the rain showers had ceased,which certainly added to the experience. The only water lay under foot, to be splashed through by wellies as the slip, and civilisation, faded behind us.

That said, evidence of man-made activity appeared as we ventured down the broad sandy channel meandering southwards in the general direction of Icho Tower. Some were signs a lost civilisation: crumbling piers and storage pens once vital to a booming fishing industry, and possible trackways cut to allow vraic carts in for harvesting nitrate-rich seaweed from among the rocks. It was a staple for Jersey farmers, used to fertilise fields during the Island’s potato-growing heyday. Today, south of La Hocq, and elsewhere along this coast, another crop is in mass production. In common with the Jersey Royal potato, Derek explained during one of our frequent stops, most of it is destined for overseas’ markets. 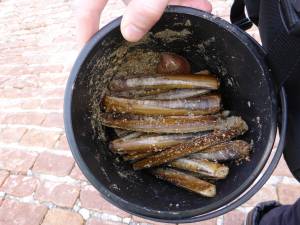 ‘Not many people know that Jersey has the largest oyster farm in the British Isles,’ he revealed when we arrived at an area filled with frames and net sacks. ‘Here at La Hocq, Jersey Oyster grow baby Pacific oysters that once big enough move across to Grouville Bay before final collection, sorting and dispatch to France. It takes about 18-months from start to finish, working down here between the tides in all weathers. But obviously worth the effort, given the demand for the Royal Bay oyster.’

The not-so-humble oyster is one of many types of shellfish encountered. Through Derek’s patient explanations, we learn that an extraordinary variety of seafood exists down here – some easy to collect, some more challenging – along with a range of edible seaweeds. In days gone by, he says, hosts of low water fishermen would have combed the area at low tide, prodding, raking, hooking and netting food for the table and selling on to others. There are far fewer prepared to spend the time today, or who retain the knowledge of choicest places to hunt. But you still encounter them, although the name has changed from ‘low water fishing’ to the more trendy ‘low water foraging’.

As we drew nearer to Icho Tower, there was the chance to engage in some low water foraging for ourselves (Derek is happy for his walkers to collect the makings of a fruits-de-mer along the way). One of our group was after razor fish, or razor clams as they are also called. In a wide sandy area close to the low water mark, we hunted for our quarry, their presence betrayed by keyhole-shaped openings and small water spurts as they dug deeper into the sand for protection. Success was admittedly limited, but satisfying when one was eased from its den. 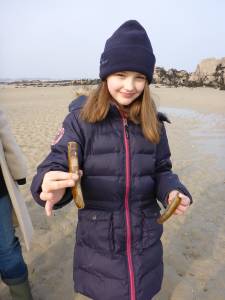 A final splash through rock pools filled with brightly coloured sea anemones brought us to the base of Icho Tower. Built around 1810, Derek explained that it was one of three constructed to protect Jersey against French invasion. These differed from the earlier Jersey Round Towers, such as the one standing above La Hocq Slip. Icho is a true Martello Tower, shorter and stubbier in stature, with less apertures for muskets and room for a more powerful cannon on top. Military technology had moved on, and the Island’s defences developed to counter renewed threats.For us it was there, in that enigmatic location, that our walk adventure came to an end. Well, sort of, because Derek had to lead us back to Le Hocq of course, with further interesting moments along the way. But it was there, at Icho Tower, that a moment’s reflection summed up the joy of this whole experience. It has taken an hour or so to arrive at this spot, just a mile from shore and a relatively easy walk to reach. And yet, we were in a different world, one that few people bother to explore, much less comprehend. Granted there is perhaps a reluctance to venture far from paddling crowd when visiting the beach, especially given the stark warnings posted about being cut off by the rising tide. Yet under the guidance of an expert such a Derek, it’s possible to visit with minimal risk. And, as Derek is keen to point out, once you understand the area, and the risks, there is no reason not to come again and again to enjoy the beauties and bounties of this, Jersey’s great wilderness.

So why not pull on some wellies and give it a go? The great outdoors is out there – and closer and more accessible than you might think.